I love the Ys serie a lot and so I thought I'd make a thread of it !! What's your favorites ? Looking forward to Ys9 in february ?? 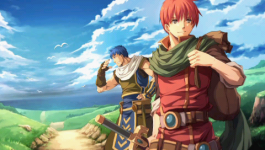 I would like to give it a try, but I need to finish the Trails series first.

That sounds good !! For me it's the other way around ! I still have a long journey ahead of me with the trails ! But at least Ys are for the most part a lot shorter.

If I wanted to start playing, which would be the best one for jumping in?

I would say the serie being very episodic you wouldn't really be lost with any of them so it depends on what you feel like going with as some have different gameplay and systems to them as well. The stories are still connected but often more hinted at previous adventures and more focused around the current story.

If you want to go more with a chronological order though :
- Origin (hit and running/jumping with magic type system)
- Ys 1 & 2 chronicles ( Bumping system)
- Ys Memories of cecelta(ys 4 remake) (Party system)
- Ys Oath in felghana (ys 3 remake) (hit and running/jumping with magic type system) (also my personal fav but also one of the hardest)
- Ys 5 (Never released in the usa) (similar to Origin/Ys6 and oath but much earlier of that setup)
- Ys VIII (Most recent of the party system, also longest story of them all)
- Ys 6 ( Similar system as origin and oath but came out before them so not as polished, jump is bad but everything else is still fun)
- Ys 7 ( earliest release of the party system, 6 months after ys6)
- Ys 9 (Coming to usa next feb ... Party system like 8 but seems they added more verticality and more things)