So this might end up being more appropriate for the Xeno fanart section, and/or split up into multiple threads, but we were discussing 3D printing on the server yesterday and I believe there are also some artists in the fandom who've done or are interested in doing stuff with model rips, so I thought it'd be cool to get a general idea of everyone's interests, what kinds of projects we're working on, etc., and branch off from there as necessary.

In the meantime, feel free to introduce yourself!
I started messing with Blender around 2015 and got my first 3D printer in 2018 only partly out of a twisted desire to git gud enough to print figures of my unpopular favorite characters with my own two hands because there isn't any official merch of them. I am very bad at it because my brain does not function well in 3D (ask anyone who has ever had the unfortunate experience of playing a modern video game with me; there is a reason why my husband calls walking off a cliff "pulling an Erin"), but I guess that makes it more fun or whatever. I think I might be improving in that some of the things I create now are actually printable and have various household uses (okay, "novelty light switch plate" is a household use). Also I have recently discovered lithophane technology and promptly started abusing it for terrible things.

At the moment I don't have any major projects going beyond more silly holiday decorations and small gifts and some janky custom accessories for our new house (technically most of these also fall under the broad category of "novelty light switch plate"), but eventually I would like to revisit the model I made a few years back by eyeballing screenshots of a certain Xenosaga character now that I actually have some experience making things that aren't a crime against geometry. (I kind of wish I knew what I was doing enough to grab the actual in-game model and make it printer-friendly instead of starting from scratch, but I can only use one brain cell at a time.)
Also please feel free to share your recent work and/or your profile on sites like Sketchfab or Thingiverse, if you have one. <3 Here's mine!
Reactions: HikariKuragari 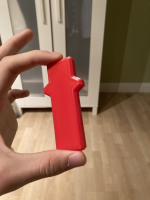 Just something I printed the other day. My idea is to make a mold and cast it with the three Aegis core crystal colors and make a display box. Its mostly a warm-up for when I build my arcade stick, but a Zohar is a Zohar
Reactions: Miltyway, HikariKuragari, SilverSoul and 2 others
Show hidden low quality content
You must log in or register to reply here.
Share:
Facebook Twitter Reddit Pinterest Tumblr WhatsApp Email Share Link
Top Bottom