So now that a while has gone by since the Xenoblade Chronicles: Definitive Edition for Switch has released, how are people feeling about this version of the game? Were you satisfied with how it turned out? What do you think some missed opportunities were? 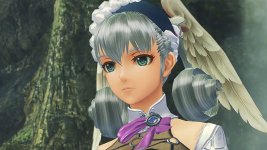 I'll be honest guys, I still haven't finished this one yet. After I got to about level 30 I started playing on the easiest of easy modes. The only problem is that this mode makes you so strong that if you are just blazing through the story eventually you will have to grind because you will be underleveled and won't be able to hit certain enemies.

Maybe this came out at a bad time for me because I was a bit preoccupied with other games coming out and stuff. I'm eager to hear what everyone else thought though. How was Future Connected for those that played through that? I know some people have a really huge personal connection to this game so I'm hoping that this version delivered for those people.
Reactions: jessiray

I really need to buckle down and finish it, but I've enjoyed it so far. The menus and such seem cleaner than I remember the original wii version having and the upscaling really helps do the art style justice.

jessiray said:
I really need to buckle down and finish it, but I've enjoyed it so far. The menus and such seem cleaner than I remember the original wii version having and the upscaling really helps do the art style justice.
Click to expand...

I actually got quite far. I think I actually got to
Egil, but the version of him that you fight inside the mechonis so I did not have too much farther to go.
I just got distracted by other things is all.

I really enjoyed it a lot more this time around with the upgraded gameplay, especially the quest lines markers and such. I'm glad I finished it ^-^ and the additional story was just icing on the cake.
Reactions: Aidan Uzuki

It's been a while since I've done a full playthrough of Xenoblade 1 so I was actually kind of nervous when I started playing Definitive Edition. I feared that the game would not hold up as well as I remembered it. Thankfully I was pleasantly surprised and the game played just about as well as I remembered it with the small improvements going a long way in making the experience smoother. That said, I did notice some of the flaws and shortcomings in some spots. Alcamoth is still too big and empty for it's own good and affinity raising is just as needlessly time consuming as ever. But the good definitely outweighed the bad and I had a hard time putting it down.

I genuinely love the base game and everything that it is. The fashion options are great, the quest conveniences (especially in the earlier versions) shaved off dozens of hours from my playtime. I think the best thing the game did was make the characters emote in a lot more scenes, including heart to hearts and scenes where they'd usually just do blank stares. The remixed music is wonderful, and options for newcomers (that can be turned off) are welcome, and overall its probably the version I will be revisiting in the coming years. So glad I imported the European special edition. There's really not much here that I would consider a step down from the original, aside from maybe the UI. The new UI is clean and functional, but I liked how Steampunk the old one was.

I have several complaints about Future Connected (mostly related to its combat mechanics and gameplay, and how its easily the worst combat system in the Blade series) but the Bionis shoulder is great from a design perspective and the story does everything it needs to. I just wish they had more of a budget to compose 2 more songs
reusing Unfinished Battle and the Final Boss theme for phase 1 doesn't work that well in my opinion, and cheapens their impact in XC1 base
but overall it was fun for what it was.
Show hidden low quality content
You must log in or register to reply here.
Share:
Facebook Twitter Reddit Pinterest Tumblr WhatsApp Email Share Link
Top Bottom