Xenosaga? In my Starbound?

I wasn't sure whether I should post this in Xeno Creative Works or in General Entertainment > Video Games, but I know there are a few other threads in here about recreating Xeno stuff in non-Xeno games, so I'll try to stick to that topic here (mods, feel free to relocate it if you think it belongs elsewhere).

Anyway, so one of my favorite games is the one about humans and sentient non-humans traveling through space after the untimely disappearance of the planet Earth, fighting over powerful ancient artifacts that may determine the fate of the universe, also there's an evil religion where they wear a lot of purple and look down on everyone who isn't them ... and one of my other favorite games is Xenosaga, so attempting to combine the two was probably inevitable.

One of the themes for Xenotober this year was "favorite area," which somehow led to me trying to recreate part of the Kukai Foundation in Starbound. I started with a custom space station and tried decorating it to look like the western half of the urban area you can visit in XSI and II (I always assumed that the side with East 6, Smile Bakery, and Lavare was "Sector 27" while the first screen with the Ironman Bar and Our Treasure was "Sector 26," but I have no idea if that's ever confirmed in canon). At first I was limited by the size of the individual rooms you can add to a space station and by the 2D perspective, so I had to rearrange some landmarks to fit. 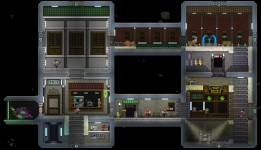 Then I started messing with admin hax to break through some of the walls and have larger open areas, so the eastern half turned out more ambitious, if not more accurate.

I wanted to spawn and/or invite some NPCs in there at some point so it feels less desolate. In the meantime, I made a secret room above the Ironman like the one where you can encounter Mintia in XSI (she's not in at the moment, but her Gnosis friend is ... well, a monster I named after her Gnosis friend, anyway). I also kind of wish I'd done more with the interiors of the buildings instead of just having the façades, which is why my next silly little project is to build the entire Foundation on a barren planet (I feel like Jr. and Gaignun probably wouldn't want to interfere with any pre-existing ecosystems, something about the Species Preservation Law) and make it more inhabitable, in line with the way NPC settlements in Starbound are typically designed.
Reactions: Aidan Uzuki, circle_bircle, Karen Hart and 1 other person
Show hidden low quality content
You must log in or register to reply here.
Share:
Facebook Twitter Reddit Pinterest Tumblr WhatsApp Email Share Link
Top Bottom